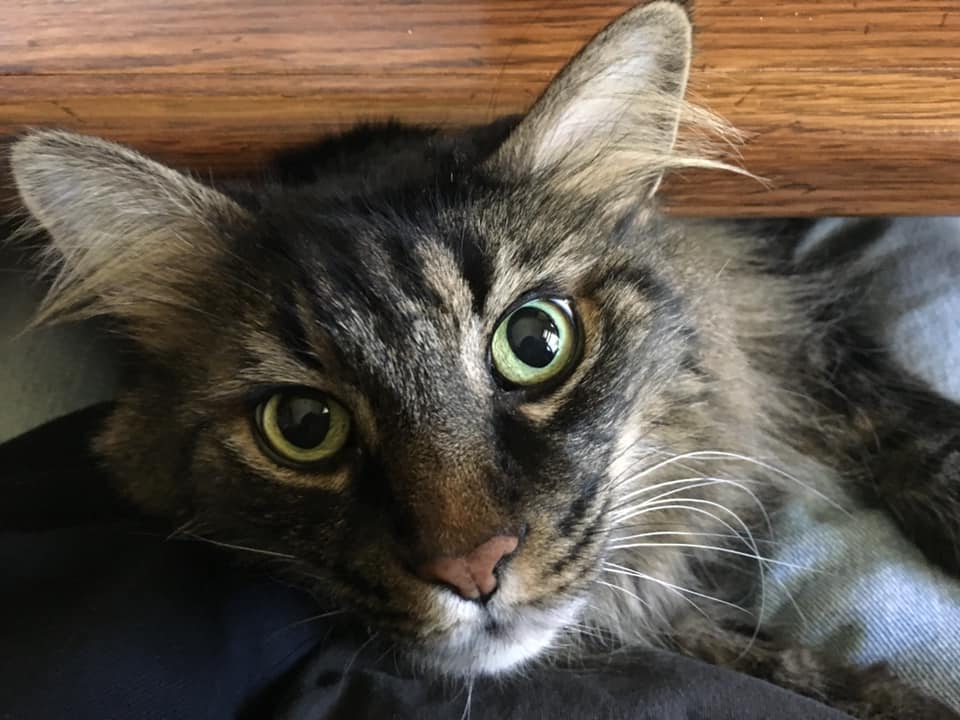 About 14 years ago, we brought Deimos and Phobos into our home from Berta’s sister’s cat’s litter in Johnstown. The two Maine Coon brothers - named after the sons of the war-god Ares, the personification of dread and fear - each had their own personalities, even as kittens.

Deimos was the playful adventurous cat of the pair. His favorite activities were fetching thrown pipe cleaners and trying to sneak out the back door when you weren’t looking. He would insist on being pet while I drank coffee in the morning, and when I didn’t, he’d bite my toes. Deimos was more friendly with people, but still preferred his family of humans. He’d sit in his cat tree during the day and chirp at the birds outside.

Before the neighbors complained about his stalking their bird houses, we used to let him outside to play. One of my fondest memories of him is of Abby teasing him with a willow frond, making him leap playful into the air, over and over. While outside, he would often stay with us and be social even around the fire pit, but he was also well known, as one of the biggest pets on the street, for stalking the neighbors’ smaller dogs as they were out on walks. He amused the kids regularly by sitting with them at the kitchen table for dinner, and occasionally sneaking something off their plates to eat. The way he’d watch you while you lifted food with a fork was particularly cute.

When we first brought home Murphy, our dog, Deimos and Phobos both retreated to the second floor to hide. But Deimos was the first to decide he wasn’t going to be constrained by a dog, no matter how big he was. He started out by coming downstairs tentatively, but ultimately reclaimed his spaces and kept Murphy in line as one of the “small dogs” in Murphy’s pack.

In the last few months, Deimos was diagnosed with cancer. We kept him at home where he remained mostly as active as older cats do. Over the weekend, his health took a turn, and on Sunday night he passed in my arms surrounded by his loving family.

Our family each has a pet that most “belongs” to them, and Deimos was mine. He lived a good life, he was a good cat, and I will miss him very much.